“If you see what looks to be a large, white bucket standing in a field, get out the binoculars and take a closer look- you may be seeing a Snowy Owl!” -Rebecca Christoffel, Iowa State University Extension wildlife specialist.

Birders around Iowa are being treated to a rare gift this year, as Snowy Owls are moving south from the Tundra. Movement of the birds into the lower 48 states isn’t such a treat for them, explains Rebecca Christoffel, Iowa State University Extension wildlife specialist. “It signals trouble for them.”

Snowy Owls are large birds, with bright white plumage flecked with black and have beautiful yellow eyes. Typically perched on haystacks, fence posts, knolls or dunes these birds stand 20-27 inches tall. These birds are from the open tundra; and nesting on the ground. The snowy owl preys chiefly on lemmings, hunting by day as well as at night.

Snowy Owls began arriving in the upper Midwest in October and have continued to increase in number as the season has progressed.  Most movements of this sort, called irruptions, are thought to be caused by a crash in important prey population; lemmings in this case. Under these conditions, younger, more inexperienced birds are forced to move south. People are keeping track of Snowy Owl sightings in the U.S.

Christoffel recommends Iowan’s fortunate enough to see Snowy Owls should report their sightings to Steve Dinsmore of ISU Department of Natural Resource Ecology and Management at cootjr@iastate.edu so their movement can be adequately tracked this year. Or feel free to contact our administration office (712) 552-1047 or email Sunday Ford at sundayf@siouxcounty.org.

Information obtained from: Iowa State University Extension, National Geographic Field Guide to the Birds of North America and The Cornell Lab of Ornithology. 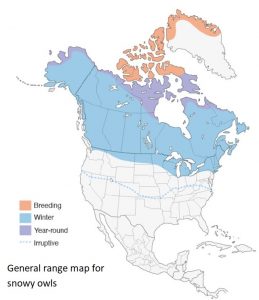 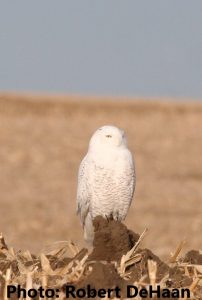